An excerpt from chapter 10, The Purge, in Sigrid Wortmann Weltges book, Bauhaus Textiles: Women Artists and the Weaving Workshop, that discusses Stölzls departure from the Bauhaus in the context of its closure, and the beginning of Stölzls new life in Switzerland.

.......
The Bauhaus was no stranger to animosity, but with Hitler's rise to power, terror and intimidation became all-pervasive. Although many years in the making, the rapidity, ferocity and thoroughness of the assault caught many by surprise. There was no collective uproar. An ominous silence has fallen over art and cultural circles', wrote Schlemmer to Gunta Stölzl in 1933. It is all up!

Stölzl's forced resignation from the Bauhaus preceded its closure by less than two years and may have helped her in securing a refuge before the deluge of uprooted Germans poured into the rest of Europe. With her marriage to Arieh Sharon in 1929 she had automatically lost her German citizenship and become a Palestinian subject. Moreover, Sharon was Jewish. All this had irritated the right-wing posse which had ousted her in Dessau and had contributed to their charge of impropriety. It had been counted against her then, now it added once more to the precariousness of her existence. Stölzl encountered the fate of every displaced person: the struggle for legal papers. The need for authorization to work, residence permits, a valid passport and a host of official forms kept her in a perpetual state of insecurity. I do not have the faintest idea where I could go if Switzerland is no longer an option - France, Paris - every place is saturated with émigrés, none of whom know how they can make a living. Not until 1935, when she feared she might become stateless, did she receive a British passport. In 1925 Stölzl had commented that Benita Otte was treated royally because of her Bauhaus stamp'; in 1933 the craft school Burg Giebichenstein was forced to terminate the contracts of Otte and other Bauhäusler because of it. All my friends in Germany', wrote Stölzl from Switzerland, have to start life all over again . . . just as I had to here. But her position in Zurich was by no means secure. The handweaving studio she had started in 1931 with two other Bauhäusler, Gertrud Preiswerk and Heinrich-Otto Hurlimann, experienced financial difficulties and had to close a year and a half later. Commissions were sporadic and barely paid the bills for herself and her young daughter.

Despite these frustrations, Stölzl integrated into Swiss society and never lost her gratitude to her host country. She joined several professional organizations, including the Swiss Werkbund, which enabled her to participate in exhibitions. Over time, she collaborated with a number of textile companies. Her willingness to accept all kinds of commissions and the technical expertise that she used to execute them, enabled her to endure these years of hardship. She designed and produced an astounding variety of textiles, from prototypes for machine-woven curtains, wall coverings, table-cloths, rugs, upholstery and apparel fabrics to individual projects like theatre curtains and interior schemes. Her business, which she opened in 1937, went by the name of Studio Flora. Contacts with other Bauhäusler were curtailed by the War, but somehow messages got through. The past was a strong bond. New friends', wrote Schlemmer to Stölzl in 1942, -ah, they are few and far between, and you are very right that one gets the greatest pleasure from seeing the old ones, who have already become part of history. To her new friends, Stölzl added a new family. In 1942 she married Willy Stadler with whom she had another daughter. She was now a Swiss citizen.

Largely through Gropius's initiative, American interest in the Bauhaus began as soon as communication with Europe was restored after the War. Stölzl sold a hanging to the Busch-Reisinger Museum in Cambridge, Massachusetts, in the late forties, and another one to the Museum of Modern Art in New York in the fifties. Subsequent purchases and gifts of weave samples have augmented both collections. Germany did not pay tribute to the Bauhaus until the sixties, due in part to the division of the country and the location of both Weimar and Dessau in the Eastern zone. Hans Maria Wingler, who undertook the monumental documentation of the Bauhaus with the support of a Rockefeller grant, staged the fast exhibition of the Weaving Workshop in Darmstadt in 1964. Stölzl was prominently represented. From the moment Gunta Stölzl first encountered a loom, she recognized her innate talent to transform yarns into complex, limitless varieties of woven entities. When the joyous experimentation of the Weimar years gave way to Dessau functionalism, she not only adapted but also pioneered new materials and fabrics. As an educator she was modest, free from jealousies, consistently encouraging and eager to recognize exceptional talent. Weaving was her life. She had experienced offhand the challenges of the medium and now, in her later years, returned to the starting point, delighting once again in weaving as art. Gunta Stölzl died in Switzerland in 1983.
.......
Read More 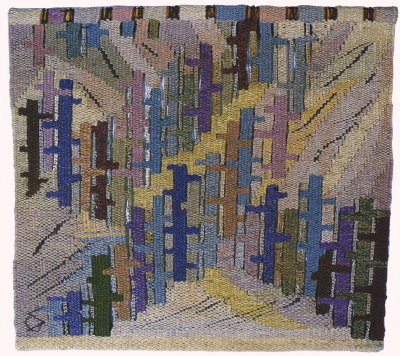